I've uploaded the java-replay & PGN of all the games from FM Steve Stoyko's lecture on the Winawer Variation, which took place at Kenilworth on November 8th.

The Tarrasch Variation segment, which was to have taken place the same night, will be on Thursday, December 6th. (8:00 p.m.; $5.00 admission).

Posted by Chess Coroner at 2:48 PM No comments:

FM Steve Stoyko's 3rd lecture on the French Defense, which was given at the Kenilworth CC on November 1st, covered the Steinitz Variation, Classical Variation and Alekhine-Chatard Attack. Here are the java-replay & PGN of all the games from that lesson.

Perhaps the most interesting segment that night was Steve's good N vs. bad B ending illustration & recommendations. I have taken the liberty of modifying the diagram from his text to even out the tempi & try to match it to an actual game.

Good N vs. Bad B ending 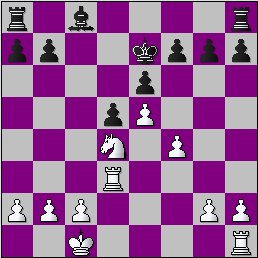 Black to move
Posted by Chess Coroner at 5:39 PM No comments:

NM Scott Massey is scheduled to give a lecture at the Kenilworth Chess Club tonight, starting at 8:00.

I'm not sure about the admission fee or topic but the lectures are usually $5.00 & the KCC calendar indicates Polish GM Akiba Rubinstein may be the subject.

FM Steve Stoyko's 2nd lecture on the French Defense covered lines with ...dxe4, 3.Be3 & 3.Bd3. The notes below are derived from his accompanying text.

If all of this can be accomplished, Black will have equal middlegame and endgame chances.

Patience is needed when playing this way with Black. He cannot really attack anything and has to wait for White to do something rash or over-aggressive.

How does White make progress?


...dxe4 Summary
All of these lines (Rubinstein, Purdy, Fort Knox, Burn) are interesting and require both sides to play well. Black often has to defend against K-side attack but, if he accurately does so, he has every prospect of winning since the White player tends to go "all-in". The attacking side is NOT easy to play. I have been on both sides of these positions and have always seen White get into severe time-trouble!

Here's are the java-replay & PGN of all the games from the lesson.

The last part of the lecture series, which will cover the Tarrasch & Winawer Variations, is tonight at 8:00 p.m. ($5.00 admission)

Posted by Chess Coroner at 1:45 PM No comments:

I have annotated my games from the Labate Grand Prix where I scored 2.0/5, upset expert Maurico Camejo (who, at 2093, is the strongest player I've ever beaten in a USCF OTB tourney) & had a 2010 performance despite...

Here they are in Java-replay & zipped PGN. 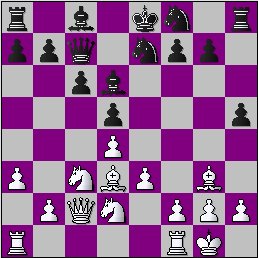 White to win
Posted by Chess Coroner at 5:49 PM No comments:

I've finally gotten around to annotating my Kenilworth G/30 loss to FM Steve Stoyko (it was promised in post #208!) & adding it to the tourney's replay page & zipped PGN file.

To see who gained & lost rating points in the event, check out the official USCF crosstable.
Posted by Chess Coroner at 2:42 PM No comments:

Two Sundays ago, at the Westfield Quads, NM Mark Kernighan won a 15-move miniature against Tim Hall's Nimzo-Indian Defense. The variation? ...his favorite 4.Bd2, which some (not me!) have criticized. 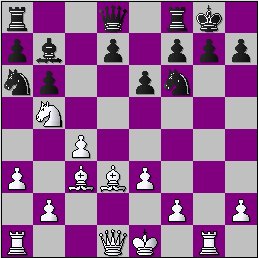 Here's the full game, with annotations, in java-replay & PGN.
Posted by Chess Coroner at 2:05 PM No comments:

The event drew 12 titled players and a total of 38 entries.

Fellow blogger Jim West, who finished at 3-2, has already posted his best effort as Black. My games, which you'll laugh & shake your head at, will follow ASAP.

Posted by Chess Coroner at 12:41 PM No comments: