Final round play on the top 6 boards (back & center rows below) was delayed more than 20 minutes due to pairing foul-ups. 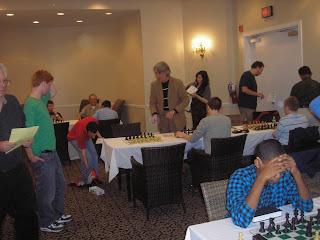 In the photo above Lenderman (red shirt), IM Mikhail Zlotnikov (beige suit) and Ms. Melekhina collect their belongings while, in the backround, Hess awaits the missing Paragua and NM Vladimir Lipman gets ready to play Sarkar.

When everyone was located and everything was straightened-out, boards 1-4 began as follows:


Actually, my primary reason for visiting the event was to see how Asbury Park, where my family vacationed in the late 60s and early 70s, looks now. 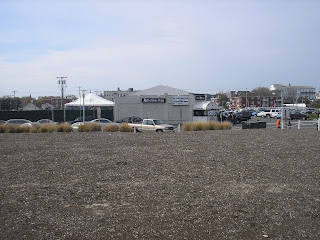 Not surprisingly, most of the places I remembered from that era are gone: the Golden Sands Motel (which apparently was on 3rd Ave.), the Taylor Pork Roll Restaurant and the horrible Homestead Restaurant... 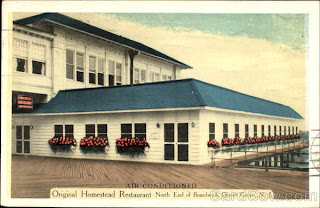 ... which was over the water and served a crappy meatball when you ordered a hamburger!

The Howard Johnson's Restaurant, which was boarded-up when No Reservations host Anthony Bourdain did a segment from there for his 2005 New Jersey episode, however, has re-opened as McCloone's Asbury Grille and Tim McCloone's Supper Club. 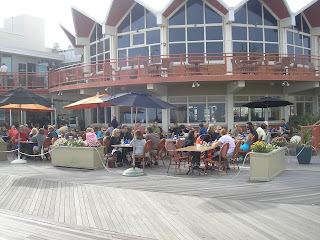 Anyway, I had a good time hanging-out with my 2009 USATE teammates Ziggy, Ari and Don V and going down memory lane. The weather was so great not even a pair of 1.5/4 scores could keep Eve and Ilya Zhurbinskiy from smiling as they strolled the boardwalk!! 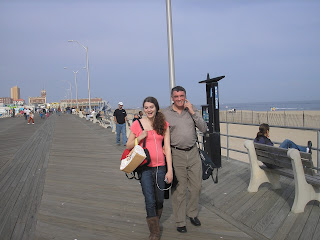 Posted by Chess Coroner at 4:37 AM